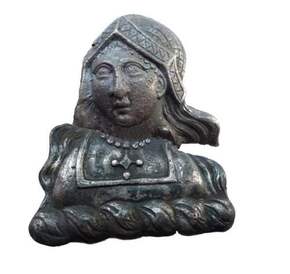 It was a beautiful and still spring morning, with the April sun glistening on the the early morning dew.
The sound of collared doves calling, blackbirds singing and the territorial call of the great tit cutting through the air.
It was the third visit to the field with my replacement for  the Fisher 1266X, ....the XP Déus V2.
The search line was laid out and away I went, listening to all the new sounds emitted by the Déus' cordless headphones. The readout was equally absorbing as I'd never had such a visual feast before.

The field had already produced several pre-decimal coins, about 450 altogether.
I'd already covered the entire field using the line and poles, along with the Fisher 1266X, amazingly the Déus produced another 96 coins!

At about the centre of the field I looked back at my footprints in the dew, I could see exactly where I'd been and thought "I don't need the line" and smiled to myself.
Seconds later I had a positive signal that was as at least as deep as the coins but came up as a '79' on the meter instead of 84.
A square hole was cut and the cube removed and carefully placed to oneside. A check of the plug and a visual on the base of hole showed that there was nothing there. A scan over the hole revealed that the object was still in there.
The newly acquired pin pointer made a slow signal noise and slight vibration showing the object was deeper. The trowel was used to remove another inch of soil. The pin pointer was now more pronounced and I thought that whatever it was would soon emerge. It did....... I could see that it was a badge or brooch of some description and when I wiped the soil off it a face stared back at me. My heart missed a beat and I thought "wow, I wonder what it is". After a few nano seconds of excitement I thought "hang on, this is Victorian" due to the superb condition and the fact I'd found lots of Victorian coins there.
I popped the badge into the finds bag and carried on searching with all sorts of thoughts in my head as to what it may be.
As it was getting towards 4pm and tea time I thought I'd pack in for the day and get home to clean my finds before tea.

All the finds were now devoid of soil and the badge looked quite cool. I thought that it may straighten but I could tell that there was no way without applying heat to it.
I did the 'silver check' and phew... what a stink!
My wife came home from work and asked how the new machine was performing.
I showed her the badge and she said "oooh, thats pretty".

With the badge next to me on the arm of the settee I logged on to the internet and posted a picture of the badge on both the MDF and UK Detector Nets' ID section of their forums.

Those particular posts which featured on both forums can be viewed here (MDF) and here (UKDN).

At first I thought it was a "Strange Folded Bishop?" (as posted on MDF) then, thanks to both forums, it became a "Tudor silver female bust"!
Members of MDF and UKDN advised me to get it to the FLO, of which I was in the process of doing so.

I showed it to the FLO (Stuart Noon) and he said he'd never seen anything like it and would take it for further investigation. Due to its apparent age and silver it could be a Treasure case he commented.
A 'treasure' form was duly completed and signed and that was the last I saw of her for a while.

The next meeting with Stuart Noon (the FLO for Lancashire & Cumbria) was a revelation.
He began to tell me what the British Museums' interpretation of the artefact was, with whom was represented on the the badge and the story behind it. He did warn me that I'd think it may be far fetched.
"Eleven thousand virgins!!!.....you've got to be kidding me". He just smiled and said "thats the opinion of James Robinson (and other advisors) at the BM ... it's a badge of the Cult of St Ursula and her 11,000 virgins!

That was it, the start of a crazy period in my life that may never be repeated.
On the 21st of June 2011, the story of Ursula went viral.
The Guardian newspaper was the first to bring this story to light by interviewing James Robinson (BM) with other newspapers quickly following suit and then the news spread to the the internet, TV, radio and archaeologists were even tweeting each other between Sweden and Hawaii!
What a mad, mad week that was! It was so surreal and unreal.
The BBC aired an interview that was featured on BBC News 24

Fast forward to 2013 and the badge of St Ursula is now with The Museum of Lancashire.
I received an email from the museum asking if it was ok to forward my contact details to ITV as they were going to film a second series of "Britain's Secret Treasures".
After the initial interviews with researchers a filming date was set.

On the 1st July 2013 the film crew with director Samuel Palmer arrived at the museum to film the background to St Ursula and the significance of the badge.
After that, it was a section filmed at home with the conclusion being filmed in Cologne.
This section of the story in Cologne was quite surprising with Mariella Frostrup being equally amazed at the sight of the collection of hundreds of human bones at the Basilica of St Ursula.

Here is the clip to "Britain's Secret Treasures". St Ursula - The Story Behind The Badge.

The debate on whether to straighten the badge goes on. The next stage is to examine St Ursula at York University and assess the possibility of straightening her without any damage. The assessment will be done with some of the country's top metallurgists giving advice.